It’s almost summer and my shorts don’t fit. I live in Texas, shorts are NOT optional. Which means, it’s time to diet. Sigh.

Even more than dieting, I hate exercising.

Seriously, running is the WORST. I’ve been running for a little more than sixth months now, and while I’ve gotten better at it, it hasn’t gotten any easier. Every time I run I still feel like I’m going to die.

Like most people, I find myself giving myself pep talks. And the most frequent one by far is, obviously, Lord of the Rings related. I picture Aragorn, Legolas, and Gimli running across the plains of Rohan. “We will make such as chase as shall be accounted a marvel among the Three Kindreds: Elves, Dwarves, and Men. Forth the Three Hunters!” 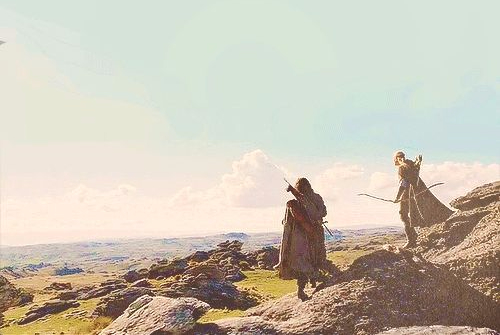 Eomer says it was 45 leagues they ran in four days. Apparently 45 leagues is like 150 miles or something. IN FOUR DAYS.

So whenever things get difficult, whenever I feel like I’m about to quit, I remind myself, “You’ve only got a mile and a half. Aragorn ran for four straight days. You got this.”