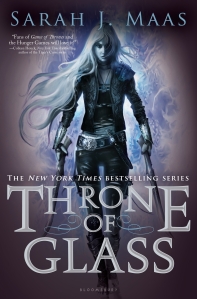 In a land without magic, where the king rules with an iron hand, an assassin is summoned to the castle. She comes not to kill the king, but to win her freedom. If she defeats twenty-three killers, thieves, and warriors in a competition, she is released from prison to serve as the king’s champion. Her name is Celaena Sardothien.

The Crown Prince will provoke her. The Captain of the Guard will protect her. But something evil dwells in the castle of glass–and it’s there to kill. When her competitors start dying one by one, Celaena’s fight for freedom becomes a fight for survival, and a desperate quest to root out the evil before it destroys her world.

I’m of two minds about this book. On the one hand, it was pretty good. On the other hand, it was kind of terrible. I know that a lot of people are like, obsessed with Sarah J. Maas, but this just didn’t do it for me the way, say, The Hunger Games did.

Honestly, going into this book I wasn’t really expecting it to be amazing. I knew it was probably not going to be all that well written, and I was okay with that. I was just looking for a fun series to read this summer. And it definitely was fun. I enjoyed it. I just don’t really understand what all the hype surrounding Maas books is. I can only assume the Court of Thrones and Roses series is way better.

Side note: What were they thinking on the original cover? Ugh! Thank goodness they switched to the fabulous new one.

3 thoughts on “Review: Throne of Glass”

Did you enjoy An Absolutely Remarkable Thing and A Beautifully Foolish Endeavor? Try Rosewater by Tade Thompson! This Nigerian author has a wholly original take on first contact that was absolutely fascinating to read. It's been long enough since I read it that I don't remember what all content warnings to give, but just assume heavy content, k? Bonus, this series is DONE, so you can binge it if you want.
Today's post is brought to you by my in-laws. We have been without power for 50 hours, so we left the house to stay with my mil. They are having rolling outages. We are so thankful to be warm again and sipping tea almost like things are normal.
We've been without power for 10 hours with temperatures 15+ degrees below freezing. There's nothing much to do but sit either in bed under the blankets or next the fire and read a book. Thankfully the sun is out, so at least we can see.
Not quite the blizzard we were promised, but still the most snow we've had in a decade and record low temps. The kids played outside for about two minutes before their fingers got too cold and they wanted to come inside. 😂
It's the coldest this weekend it's ever been in my lifetime here in Texas, and they're predicting a literal blizzard tomorrow. So of course, fuzzy blankets and sock are a must.
My first reaction when this book was handed to me through the library window was "Holy crap, this book is OLD." My second thought was "I bet it smells amazing." And it does. It *really* does.
Loading Comments...
Comment
×
%d bloggers like this: