Hello friends, and welcome to the first annual Favorites February! This month I will be re-reading the Percy Jackson and the Olympians series, and blogging about it as I go. This is one of my favorite middle-grade series, and I wish it had been around when I was a kid. I’ve really been enjoying the re-read. I got the box set for Christmas about three years ago and have never had the chance to read them, so I’m cracking these lovely books open for the first time and trying desperately not to ruin them!

First up, The Lightning Thief! 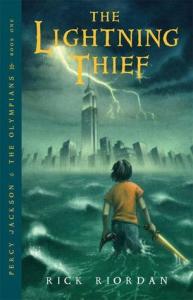 Percy didn’t ask to be a half-blood. It’s bad enough that he’s ADHD and dyslexic, and he’s been kicked out of six schools in six years, but he just found out his dad is a Greek god. That’s right, those Greek gods. Also, his best friend is half-goat, which is totally weird, his mom is missing, and his step-dad is a smelly jerk-face who is blaming him for his mom’s disappearance. Still, he gets to go to this cool summer camp where he learns sword fighting and archery and Ancient Greek, so life isn’t ALL bad. Until the gods issue a warning, and Percy only has until the summer solstice to prevent World War III. Three pre-teens trying to save the world. What could go wrong?

Why I Love This Book

“I knew this wasn’t a dream. I had no imagination. I could never dream up something this weird.”

God of War
Physical Description: Hugely bulked up, past reasonable; brutally scarred face; black crew-cut; eyes with flames instead of irises and pupils
Personality: Super confident and self-assured, loves violence in all forms, likes to call people punk, not particularly smart
Comparison to Traditional Myth:
This book actually gets Ares really close to his traditional self, even in ways that might not be familiar to casual Greek readers, like me. As in the well-known tales, Ares is having an affair with Aphrodite, and her husband, Hephaestus, is trying to catch and humiliate them. His trap, in fact, very closely resembles the traditional tale: Hephaestus catches them with a net and invites the Olympians to watch and mock. Unlike in the traditional myths, however, he does not succeed. They seem to be on the lookout for his nets these days! Personally, this story was new to me, and I’m doubly impressed with Rick Riordan for including it when he didn’t have to!

It seems that the ancient Ares was fond of arguments and war, and that Zeus rather hated him for never being at peace. In that way Riordan’s depiction of Ares as being the type to pick a fight, even with a kid, seems rather apt. The Greeks were afraid of Ares, seeing him as a savage version of war, too destructive. Unafraid to kill men. Riordan’s Ares also seems to be violent to the point of being a bit unhinged. He loves war for violence’s sake, and has no problem starting one. He is also unafraid to hurt civilian bystanders in his battle at the end of the book.

Finally, it seems that Ares is often humiliated in the Greek myths. This one is no exception. No spoilers, but Percy manages to humiliate Ares (and his children) more than once.

All in all, it sounds to me (based on VERY limited research!) that aside from Ares’ modern clothing choice, Riordan wrote a very historically accurate version of the God of War. The spirit of the character is definitely true to ancient stories.

Feel free to join the discussion in the comments! I would love to hear what YOU think! Especially if you disagree with me.

1. The god Ares says he loves America. He calls it “the best place since Sparta.” What does he mean? Do you agree with his assessment of America?
So, like Sparta, America is obsessed with war. Whether this is in the form of our politicians, constantly sending young men overseas to fight a battle that isn’t even ours (yes, even the “peaceful” ones…), or teenagers playing shooter video games and killing each other online, or even just an average-Joe, watching a spy movie where James Bond kills hundreds of people without even beating an eye. We are so indoctrinated into a culture that is okay with war and violence. It’s easy to see why a god of war would love that.

2. When Percy finally meets his father, Poseidon seems distant and hard to read. Percy says that he is actually glad about this. “If he’d tried to apologize, or told me he loved me, or even smiled—that would have felt fake. Like a human dad, making some lame excuse for not being around.” Do you agree with Percy?
Whether you blame them for it or not, a lot of dads in the 21st century aren’t around. Whether because they don’t live with mom and the kids, or because they are at work trying to make life better, a lot of dads aren’t at home. And I think that hurts kids, especially boys. Even if they understand, they feel like there’s something missing. I know I did when my mom wasn’t home. And I can see why a kid like Percy would feel like any excuse was a “lame” one. Because to Percy, at the end of the day family and friendship is the most important thing. He would rather be poor and together than rich and alone.

I know looking back on my childhood, I 100% agree with Percy. My mom worked a LOT, and she was hardly ever there for me. And to me it just wasn’t worth it. She thought work was more important than me, and that still hurts. But that’s because, like Percy, I prioritize family. I know not everyone feels that way.

3. How does the last line of the prophecy—you shall fail to save what matters most in the end—come true? What do you think of this ending? Did Percy make the right choice?
When given the choice to save the world or save his mom, Percy chooses to save the world. He leaves his mom behind in Hades. I so admire that decision, though I’m sure I could never make it!

Although, since his mom does end up at home, you could argue that the thing he fails to save in the end is Luke. This is one of the most brilliant things about this whole series. Rick Riordan consistently writes stories with almost happy endings. I think it’s so important for kids to learn that life doesn’t always have a happy ending! Sometimes bad stuff happens and it stays bad. And I don’t know that there’s any choice Percy could have made that would have changed that.

4. In the end of the book, do you sympathize at all with Luke’s feelings of betrayal? Is there anything you can relate to about his point of view?
Oh absolutely. I think Poseidon says it perfectly when he tells Percy that he wishes he hadn’t been born, not because he isn’t proud of Percy, but because he knows how hard life will be for him. Imagine being 17 and having lived with that your whole life. On top of that, Hermes has dozens of kids and doesn’t seem to care about any of them. (We learn later that he does, but Luke doesn’t know it!) I would be pissed off too.

5. Percy’s learning difficulties become strengths in a different context. What seem to be attention problems enable him to be aware of all sides of attack during a battle. What skills are valued most in today’s society? How might students who struggle today have been successful in a different moment in history?
We definitely value a certain kind of kid. We value kids who can sit still and quiet, who are book-smart, and who follow directions instantly and without question. Skills like athleticism, artistry, or handiness are definitely undervalued. As a teacher, this absolutely breaks my heart.

However, I don’t know if I would say my students would somehow be more successful at a different time. Sure, maybe their athleticism would have been more valued in ancient Greece, but they might well have been born slaves or something and never had the opportunity to learn they even HAD that skill. Even though we place value on a certain kind of kid, people have never in history been more free to pursue what they want, rather than what society wants for them. And that’s pretty cool.