Wow, I can’t believe September is already over. It’s still 90s degrees here in Texas. I have to say that I am READY for October. Like, literally, I am prepared. We’ve already got Halloween costumes…

We had a great month with Calendar Girls talking about books about pirates. The overwhelming consensus is that we love pirates, but most of us haven’t read very many books about them. So Imma take a second and (once again) plug Erin Morgenstern’s new book The Starless Sea which is at least partly about pirates. CAN’T WAIT!

Pirate’s Life for Me
Favorite Book About Pirates

Our Favorite Pick is…

This month we’re starting with The French Lieutenant’s Woman by John Fowles.

Well, I’ve never read The French Lieutenant’s Woman. 20th century literature, ick. However, I read the synopsis on goodreads! It appears to feature a looooove triangle. Another classic novel featuring a love triangle is… END_OF_DOCUMENT_TOKEN_TO_BE_REPLACED

About 5 years ago (maybe a little more) a fun idea for a book came to me in a dream. I may have even written a page or two in my journal, but I’ve never been able to write more than a chapter or two of a book. One summer I got halfway through a Northanger Abbey contemporary YA, but other than that ideas have always ended pretty much at the idea board. Besides which, I don’t think I’m a particularly good writer, and this idea is too good to waste on bad writing. So I’ve not ever done much other than dream about it.

But recently something I said offhand on twitter made my husband say something to me which got all kinds of lightbulbs going on this story again. I now have a bare-bones outline and ONE character name! But it’s still mostly living in the idea realm.

Most likely this story will never get written. As I said, it’s too good of one to waste on my poor attempts at writing fiction. However, I am officially not giving up on it. Instead I am leisurely pursuing it. No actual writing yet, just jotting down ideas as they come to me. However, I am starting to run out of ideas and need some inspiration.

That, bookish friends, is where you all come in! I want to read some books or watch some movies in a similar vein. Not for ideas, so much as to get more familiar with the genre. In particular, I’m not very funny and I would like to absorb some good humor, and I am not very whimsical and need to find my inner-whimsey.

Recommendations for fantasy books/movies/TV that are of the action/adventure variety, especially if they are funny. Bonus points if they’re really just for fun and not especially serious. Examples include: The Princess Bride, The Neverending Story, The Pirates of Penzance, Hook, Dragonheart, and Stardust (movie or book, they both get the idea).

Thanks guys! Looking forward to adding some stuff to my to-be-read and to-be-watched lists! ❤

It should be a surprise to no one that I’m choosing The Lord of the Rings. I mean, favorite book, obviously favorite trilogy. Do I need to say any more? END_OF_DOCUMENT_TOKEN_TO_BE_REPLACED

The Princess Bride by William Goldman

As a boy, William Goldman claims, he loved to hear his father read the S. Morgenstern classic, The Princess Bride. But as a grown-up he discovered that the boring parts were left out of good old Dad’s recitation, and only the “good parts” reached his ears.

In short, it’s about everything.

This is one of the very few cases where I actually enjoy the movie more than the book, which, if anything, is a testament to how fantastic the movie is, because this is easily one of the funniest books I have ever read.

END_OF_DOCUMENT_TOKEN_TO_BE_REPLACED

Because if you know me, you know that I have lots of unpopular opinions, and I really enjoy sharing them. Especially when I’m right. 😛

Saw this one on thebookcorps and I couldn’t resist tagging myself. Because I can never get enough of unpopular opinions. Also, I agreed with every single one of hers, so they can’t be THAT unpopular! Check out Laura and her blog, always a good read.

A Popular Book or Book Series You Didn’t Like 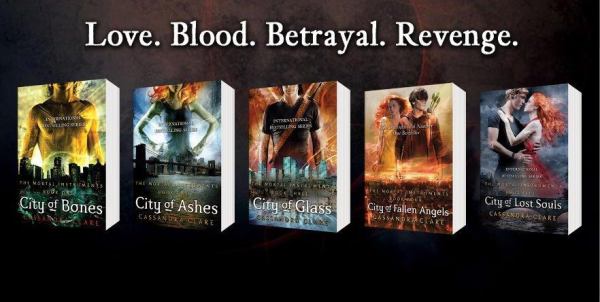 Guys, I don’t like The Mortal Instruments. They’re stupid, and childish, and not even particularly well-written. Which is too bad, really, because I can usually get behind anything that involves the slaying of evil creatures. Also, I couldn’t get past how much I hated all the characters’ names. END_OF_DOCUMENT_TOKEN_TO_BE_REPLACED