The Voyage of the Basilisk by Marie Brennan 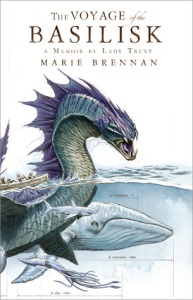 Devoted readers of Lady Trent’s earlier memoirs, A Natural History of Dragons and The Tropic of Serpents, may believe themselves already acquainted with the particulars of her historic voyage aboard the Royal Survey Ship Basilisk, but the true story of that illuminating, harrowing, and scandalous journey has never been revealed—until now. Six years after her perilous exploits in Eriga, Isabella embarks on her most ambitious expedition yet: a two-year trip around the world to study all manner of dragons in every place they might be found. From feathered serpents sunning themselves in the ruins of a fallen civilization to the mighty sea serpents of the tropics, these creatures are a source of both endless fascination and frequent peril. Accompanying her is not only her young son, Jake, but a chivalrous foreign archaeologist whose interests converge with Isabella’s in ways both professional and personal.

Science is, of course, the primary objective of the voyage, but Isabella’s life is rarely so simple. She must cope with storms, shipwrecks, intrigue, and warfare, even as she makes a discovery that offers a revolutionary new insight into the ancient history of dragons.

The Voyage of the Basilisk is in the same vein as the earlier novels in the series, so how you felt about those would definitely determine whether you liked this one. If you HAVEN’T read A Natural History of Dragons, definitely read that first. This novel could stand alone, I guess, but would be enjoyed better as part of the series.

I am absolutely obsessed with the concept of dragon natural history. Which I guess these days would fall under the biology umbrella? Whatever. Every time a new breed was introduced I was dying to know where it fell in dragon taxonomy. I love that there are dragons, wyverns, sea serpents, dragon-like insects, and just plain old lizards. The natural history in this book primarily focused on the question WHAT MAKES A DRAGON? And how are dragons related to their non-dragon cousins? Isabella Camherst is essentially trying to figure out where and how dragons evolved, which is so fascinating. I always get so excited about reading a book in this series because it’s so refreshing to read a book that’s almost more about the world it’s set in than the characters and story. Oooo, I love it!

Like book 2, The Voyage of the Basilisk has a distinct Indiana Jones feel. Isabella is doing research for science, but she also has a lot of adventures along the way, and occasionally ends up involved in international politics. But unlike Indy, Isabella is a woman, so she has additional problems he doesn’t. For example, scandal when she spends time unsupervised in the wilderness with a MAN! *gasp!*

In this book Isabella also has a growing relationship with her young son, which I found very heartwarming. So many women left child-rearing to a nanny or a governess in Victorian England, so it would have been very easy for Brennan to just ignore the character of Isabella’s son completely. I’m so glad she didn’t. It made Isabella much more personable than she has ever been in the past.

My biggest criticism is still that this book would have been so much stronger if it had been set in a fantasized version of our world. Scriland is similar enough to England that this is a complaint I’ve had since book 1. However, in this volume Isabella travels all over the world. That meant there were a LOT of names of places to keep up with. A lot of time a place would just be kind of offhandedly mentioned, and I’d get confused trying to figure out which country it was a part of, or if it was a new country that hadn’t been mentioned yet. But all the settings were so clearly derivative of our own cultures that Brennan may as well have just let them be. In addition, the non-dragon creatures are OUR creatures. Komodo Dragons are featured in this novel. It really should have just been a fantasized Earth.

This got especially frustrating when it came to dates. If Brennan was going to keep kilograms and other metric measurement, was it really necessary to change the names of the days of the week and months of the year? She would say the voyage left in Graminis, and I have no idea if that’s a summer month or winter month. Which, when you consider they’re sailing through the arctic, might be something the reader might like to know.

It was a similar challenge with the places. Since the map provided at the beginning of the book only shows a small portion of their travels, I often didn’t know where in the world they were. Were they still in the arctic, or had they traveled to the tropical waters yet? Sometimes they didn’t stay in a place for long enough for me to use context clues to figure it out.

Also, the text was BLUE. Whose idea was that?

But those small annoyances aside, this is such a fun series. I love reading about Isabella Camherst’s exploits, and I’m always eager to find out how she is going to get herself into trouble next. This is a charming take on Victorian fantasy, and I can’t recommend this series highly enough to anyone looking for an entertaining dragon read.

4 thoughts on “Review: The Voyage of the Basilisk”